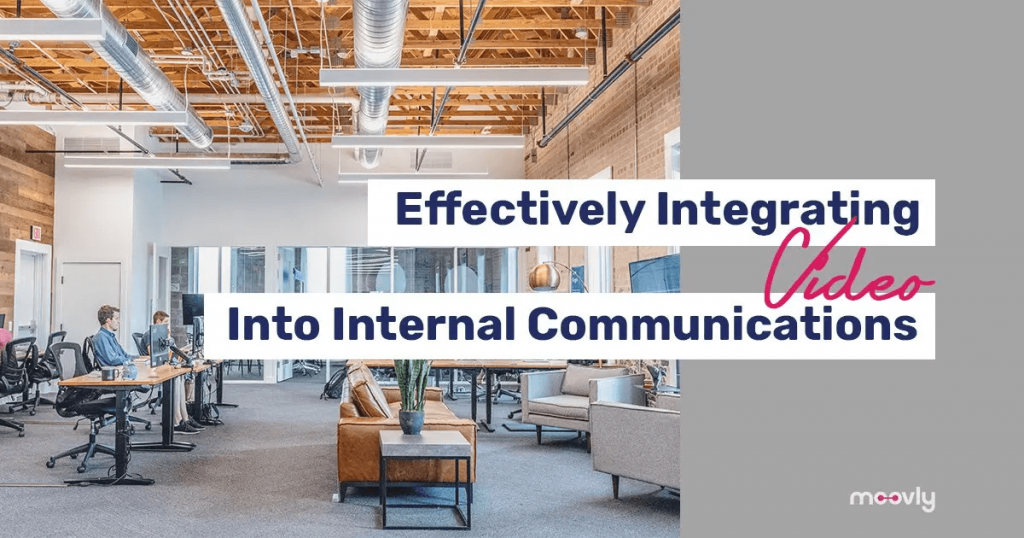 Internal communications can be a difficult field to master. It’s not as simple as you would think and can, in a strange sense, be harder than outward-oriented communications. If you have experience in the field, then you’ll know that the best form of communications for sorting things out within a company is face-to-face.

However, you will also know how impractical that can be for the majority of companies as a primary port of call for communications. This is for a variety of reasons, some relating to sensitive issues some to the practicalities of life and how much progress has been made in terms of digital communication solutions. So, even though real-life face to face communications aren’t always possible or most optimal, there is an alternative solution that is under-explored and incredibly powerful: video.

Using video as a form of internal communications might be a surprising option and one you may not have even thought about. But, used correctly it could become a really powerful asset and a go-to option for your company.

With that being said, let’s take a look at a few ways that video can help to transform your internal communications practices and create opportunities for improvement.

The changing field of video production

One of the first thoughts that gives people pause when it comes to corporate video is difficulty and/or cost of production. Video production, or film production even, is a notoriously expensive thing. And we’re not only talking about Hollywood blockbusters.

Corporate video companies find ways to charge sometimes shockingly large amounts of money for a job which, when you really break it down, shouldn’t cost nearly as much as it does. The reason for this is that video production can be quite cryptic, a mysterious multi-part process which can easily leave your head spinning.

However, the reality is that modern film production can be achieved for very little money indeed. “Obviously if you’re looking for swooping crane shots and big-name voice actors then you will be paying a steep price. But modern technology has made even the quality of video which can be achieved through your smartphone remarkably high”, notes Brian McTaggart, video expert at Academized and StateOfWriting.

You really need to keep in mind that there are tiers to the quality can be achieved and, furthermore, that not every video that you might want to produce for internal communications needs to be absolutely professional level, cinematic production.

Sometimes a special video making tool like Moovly will be extremely useful. Moovly is a drag-and-drop online video maker for businesses, transforming the ways you communicate at the workplace. Interested to create professional-looking videos in no time and with minimum budget involved? Get your free trial account and create outstanding videos with the use of numeral video templates with 1+ million free images, sounds, and videos to choose from.

Now, we can get down to the real nitty-gritty about what exactly makes video such a useful tool for internal communications.

Training videos seem the best place to start since it’s quite likely that this is one of the video usages that you are actually familiar with. Training videos eliminate the extra problems of finding times where instructors and employees can overlap to have lessons on whatever it is that needs training.

A more rigorous embrace of training videos is one of the things that could see attitudes towards videos for internal communications changing for the better. Instead of simply watching a video for training people on the basics, what would happen if, every time someone in charge decided that a change is needed, they simply committed the instructions to a convenient, shareable video and used that as their first move. This would save them having to go around groups and individuals explaining everything and it eliminates the threat of uncertainty and a lack of precision which can creep in with some face-to-face or alternative modes of communication.

Lastly, it can be distributed to a much larger group of people, even company-wide if that was felt necessary. Sometimes there are changes made which you feel ought to be heard and understood by everyone, but which would require so much extra effort that eliminates the justification.

Putting down all of the changes, all of the training and development concepts and plans, to video content allows you to achieve this with real ease.

Sometimes things which are going on inside your company are worth displaying outside of your company.

For example, imagine if your human resources manager, for example, invents an innovative system for filing sensitive HR paperwork that protects privacy and boosts efficiency. This might be something which, normally, you would just let people know about inside the company through a simple email.

However, you ought to capitalize on these sorts of accomplishments to create opportunities to show off about your company and display to the world the wonderful work that you and your employees are all doing. If in this circumstance, you abandon the typical email around to everyone and replace it instead with some video content showcasing your employee and the moment itself, this can then easily be shared beyond the confines of your company and possibly make for a smart piece of marketing, through social media and online.

The act of making a video allows you to create something really presentable that shows your genuine appreciation of your employees as well as delivering the necessary message about whatever it is that has changed within your company.

It’s a practical and creative solution with endless possibilities for adaptation in your approach.

This is obviously more of a subheading under the umbrella of the aforementioned Training Video section, but it warrants its own point.

The modern workplace has changed a lot. That much is clear. Attitudes towards everything from race relations to cultural sensitivity, to sexual orientation to mental health initiatives now is a necessary and important part of the modern workplace. The upshot of this is that there is a vast amount of ultra-fluid, complex, delicate information that employers have to impart to their employees to ensure that their workplace culture is attractive for modern job seekers and, in some cases, is compliant in the law. Issues like office romance can be extremely difficult to handle in a hands-on face to face discussion which often leads to misinformation in areas which have the highest stakes in terms of if there ever is a problem.

Making training videos for these areas particularly, the really difficult sociological areas, is extremely powerful. It puts distance between the audience and the instructor which is helpful, and it allows you to speak with absolute clarity on the standards that the office is held to, leaving no room for potentially damaging miscommunications or misunderstandings. It eliminates awkwardness as well since videos can be watched individually, instead of needing everyone together.

It’s a delicate solution to an infinitely problematic area that can cause real trouble and strife if mishandled.

It always used to be the case that at every meeting there was someone who was keeping the notes of the meeting. It still happens, but, in general, technology has eliminated the need for a secretary to be present.

Video is a way of keeping a copy, an audio-visual copy of all events. Recording a big meeting is an enhancement on a voice memo or a notetaker because it allows you to get a real sense for the room as you look back on what was discussed. This can be a really helpful tool that you can use to great effect. Don’t forget to make sure that people know when they are being filmed though. Similarly, conferences, company-wide meetings, and other events can easily slip by without proper documentation. If you’re already in the habit of having a video culture, then this becomes another area where you can get some real utility out of the medium.

“It’s so easy to see with hindsight that recording an event would have probably been a good idea. There’s no telling the number of things that you can do with the footage, so being ahead of the curve and not allowing this to become something that you wished you’d done but didn’t will save you a lot of heartaches and bring you obvious and unforeseen benefits along the way”, explains Jason Root, tech writer at AustralianHelp and PaperFellows.

Again, you need to make sure that people are aware they are being filmed and that they have given their consent, but, once you have that, you should find that you make your life so much easier through this simple act of making a video.

As you can hopefully see, there are a huge number of opportunities for the use of video as a tool for internal communications. From training and development purposes, whether that be for the most mundane areas or the most sensitive parts of human resources, all the way to the production of video content as a keepsake, if you have the right attitude you will always find some benefit to what you are doing.

We use cookies to personalize our website and offering to your interests and for measurement and analytics purposes. By using our website and our products, you agree to our use of cookies.​
Read MoreAccept
Manage consent

This website uses cookies to improve your experience while you navigate through the website. Out of these, the cookies that are categorized as necessary are stored on your browser as they are essential for the working of basic functionalities of the website. We also use third-party cookies that help us analyze and understand how you use this website. These cookies will be stored in your browser only with your consent. You also have the option to opt-out of these cookies. But opting out of some of these cookies may affect your browsing experience.
Necessary Always Enabled
Necessary cookies are absolutely essential for the website to function properly. These cookies ensure basic functionalities and security features of the website, anonymously.
Functional
Functional cookies help to perform certain functionalities like sharing the content of the website on social media platforms, collect feedbacks, and other third-party features.
Performance
Performance cookies are used to understand and analyze the key performance indexes of the website which helps in delivering a better user experience for the visitors.
Analytics
Analytical cookies are used to understand how visitors interact with the website. These cookies help provide information on metrics the number of visitors, bounce rate, traffic source, etc.
Advertisement
Advertisement cookies are used to provide visitors with relevant ads and marketing campaigns. These cookies track visitors across websites and collect information to provide customized ads.
Others
Other uncategorized cookies are those that are being analyzed and have not been classified into a category as yet.
SAVE & ACCEPT